I have got the comment on my previous post “BIRT based Control Chart“ with questions about how actually in BIRT the data are prepared for Control Charting. Addressing this request I’d like to share how I use BIRT Cube to populate data to CrossTab object which was used then for building a control chart. 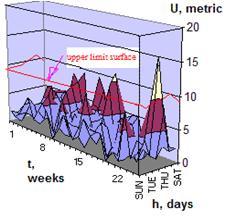 As I have already explained in my CMG paper (see IT-Control Chart), the data that describes the  IT-Control Chart (or MASF control chart) has actually 3 dimensions (actually, it has 2 time dimensions and one measurement - metric as seen in the picture at the left). And the control chart is a just a projection to the 2D cut with actual (current or last) data overlaying. So, naturally, the OLAP Cubes data model (Data Cubes) is suitable for grouping and summarizing time stamped data to a crosstable for further analysis including building a control chart. In the past SEDS implementations I did not use Cubes approach and had to transform time stamped data for control charting using basic SAS steps and procs. Now I found that Data Cubes usage is somewhat simpler and in some cases does not require a programming at all if the modern BI tools (such as BIRT) are used.


Below are the some screenshots with comments that illustrates the process of building the IT-Control Chart by using BIRT Cube.

Data source (Input data) is a table with date/hour stamped single metric with at least 4 months history (in this case it is the CPU utilization of some Unix box). That could be in any database format; in this particular example it is the following CSV file:

The result (in the form of BIRT report designer preview) is on the following picture: 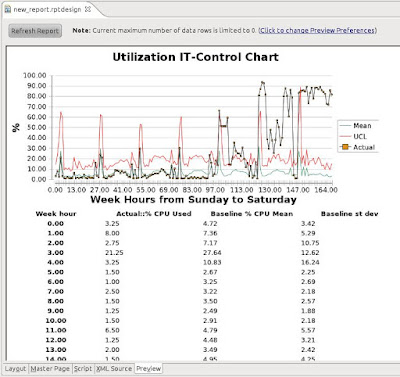 (Where UCL – Upper Control Limit; LCL is not included for simplicity)

Before building the Cube the three following data sets were built using BIRT “Data Explorer”:
(1) The Reference set or base-line (just “Data Set” on the picture) is based on the input raw data with some filtering and computed columns (weekday and weekhour) and
(2) the Actual data set which is the same but having the different filter: (raw[“date”} Greater “2011-04-02”) (3) To combine both data sets for comparing base-line vs. actual, the “Data Set1” is built as a “Joint Data Set” by the following BIRT Query builder: 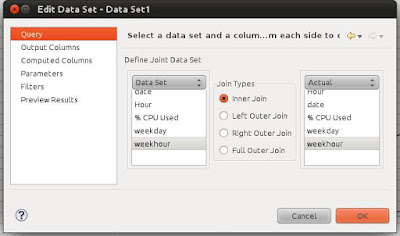 Then the Data Cube was built in the BIRT Data Cube Builder with the structure shown on the following screen: 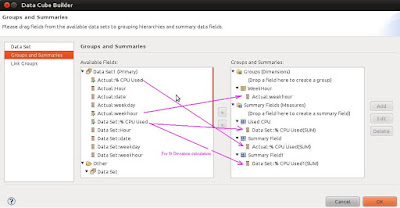 Note only one dimension is used here – weekhour as that is needed for Cross table report bellow.

The next step is building report starting with Cross Table (which is picked as an object from BIRT Report designer “Pallete”):

The picture above shows also what fields are chosen from Cube to Cross table. 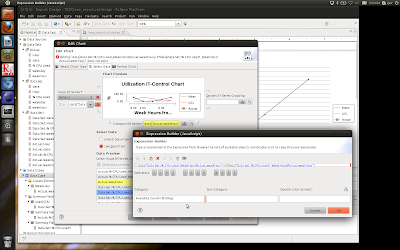 To see the result one needs just to run the report or to use a "preview' tab on the report designer window: 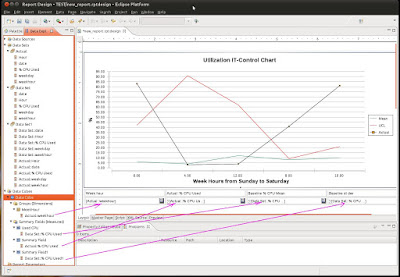 
- The BIRT report package can be exported and submitted for running under any portals (e.g. IBM TCR).
- Additional Cube dimensions makes sense to specify and use, such as server name or/and metric name.
- The report can be designed in BIRT with some parameters. For example, good idea is to use a server name as the report parameter.
- To follow the “SEDS” idea and to have the reporting process based on exceptions, the preliminary exception detection step is needed and can be done again within a  BIRT report using the SQL script similar with published in one of the previous post: